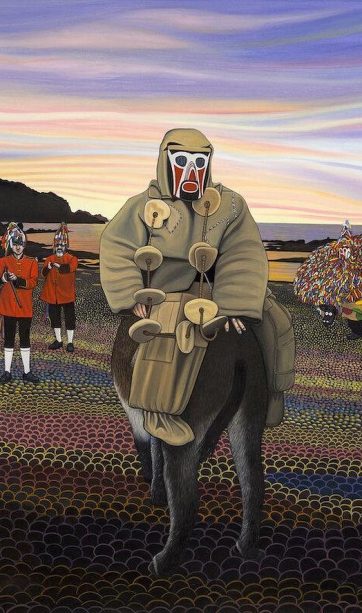 A world of history, culture and identity.

In Collaboration with Stroud Film Festival, Ben Edge is screening his new film. A film best described as a journey through the ritual year. ‘Frontline Folklore’ highlights important themes such as community and creativity. Most of all though it explores often overlooked, yet thriving British folk culture.

The film was made by visual artist and songwriter Ben Edge, who lives and works in North London. Ben exhibited in many places, including the BP Portrait Award, the National Portrait Gallery and the National Gallery of Scotland. In 2019 he set out to make the film with the help of editor Angelica Jopson, to put it all together into a documentary.

It all started when Ben stumbled across a Druid ritual in the Tower of London five years ago. At the time he didn’t have any idea what was happening, but a new obsession had been born inside him. That obsession led to a life changing journey, and the birth of a new project. He went in search of British folk customs and rituals.

When he learned there wasn’t a full-length film of Britain’s ritual landscape, Ben took on the task himself. In 2019 Ben set out to research and explore twenty of the UK’s most remarkable folk traditions.

Through this film, Ben visits and documents remarkable folk customs, rituals and ceremonies. From the Burryman of South Queensferry to the Obby Oss of Padstow, and everywhere else in between. The film covers rituals from well known to unheard of, something to engage every viewer.

Frontline Folklore is one part of a rekindling interest in British culture. It brings the heritage of Britain to the foreground in a way that is accessible to all people in every walk of life. Its importance is crucial.

For those interested in seeing the film, Ben Edge is screening at Hawkwood CTF in Stroud. The screening is a complete experience; with an option for a feast, and for people to get involved with a Q&A session. All hosted by award winning local comedian and Gloucester native Bridget Christie.

For more information about the event visit here, or for more on Stroud Film Festival visit here.